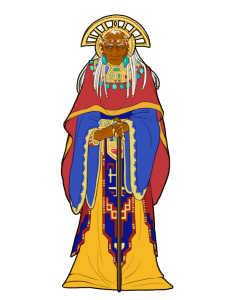 Knowing himself too set in the old ways to lead his nation into this new world, he invited diplomats from the foreign nations to tutor the crown prince Maqaxha. It was his hope that his beloved son would gain the knowledge, wisdom and diplomacy to lead Ku’Ombos into a golden era, to take its place among the other nations.

But Maqaxha‘s greedy ambition would be the downfall of them both. Grown impatient awaiting his turn to rule, the prince poisoned his father, hoping to blame the sudden death on an old man’s frailty of heart. But his nefarious plot was seen through, and the prince had to flee the palace into the dark jungle night, to never be seen again.

The kingdom left without apparent heir, it finally fell upon the king’s youngest daughter Shaqani to ascend the throne, to carry on the bloodline and lead Ku’Ombos into the future the king had so brightly dreamed of.