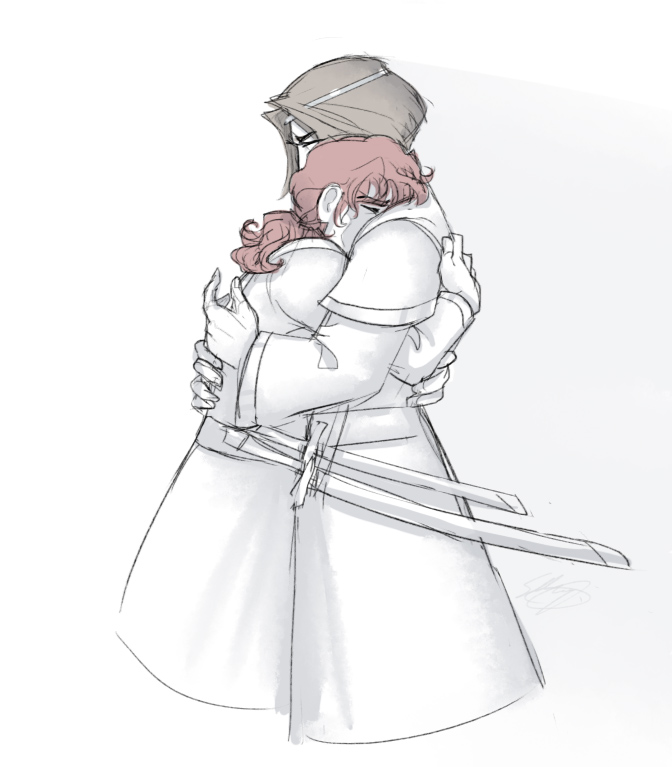 Most anticipated hug in Pangaea?

On the subject of Rannon not receiving many hugs in his life… Relonia likes hugging him, almost as much as she likes hugging Rion. Narcissus most certainly dishes out a number of hugs, though their touch tends to be more fleeting.

Akari probably wants to hug him. Often and a lot. Almost from the day they meet, as soon as he grows to realize just how human his grim new master really is beneath that icy facade. But for all Akari’s irreverent familiarity, Rannon is still royalty, and that’s one last line you just… don’t cross.

Until Rannon returns home after seven years in Ku’Ombos, haunted and fractured and and bone-weary.

Akari waits until they are alone, after all the necessary pomp and ceremony of the official homecoming, says “just this once” and clings.

It’s probably the best hug Rannon has ever had, a long, hard one, with so much genuine concern and relief and love. Lots of emotions there. Rannon apologizes in a broken whisper for not being able to keep Kann safe, Akari hugs harder, because it does hurt, and assures he’s just so happy and relieved to have his Sati back home again.

Rannon can try all he wants to act impassive afterwards, trying and reasonably succeeding in recovering some decorum, but by all gods, it’s good to be home. And sometimes “home” isn’t just a place, but the people there.

Sjali, the fine draped cloths of Machra-la, are traditionally worn by all genders, either loose as shawls, or incorporated into clothing. They are often given and received as gifts, and are used as markers of wealth and social status.