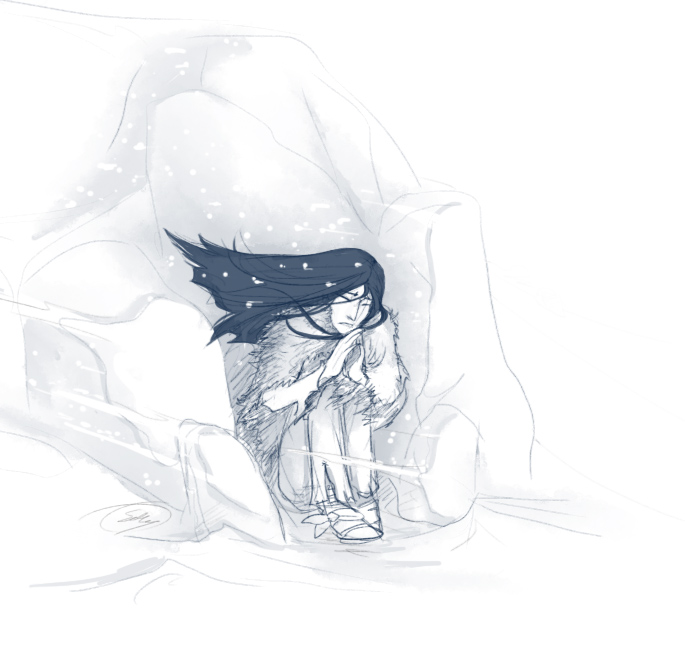 It’s a very, very long, and very, very difficult trek from At-ni Cal to Kayalana, especially if you’re on your own, with absolutely nothing to your name. But at least there are no people in the mountains, and in the choice between freezing or burning… it’s no choice at all, really.

At first it was just  panicked escape from whatever horrid death would await him in At-ni Cal, or if he was found by other Arani. At least the mountains are familiar, and the wilderness feels more safe. Definitely more running from than to. But once he reached the mountains and had time to think, the pointlessness really began to hit home for real. He has nothing, no-one, nowhere to go, not really.

He tried to end it, then, only to realize with increasing desperation that he couldn’t. Probably tried all manner of gruesome deaths (he knows very well how to kill, after all…) And no matter what, he was just… still there.

So he fell back on childhood habits to make it through the winter, with what little he had and could make himself. Which wasn’t much. (It was a highly unpleasant winter. :D)

And then he decided that if he couldn’t die anyway, he might as well try the impossible and attempt to cross the mountains, to find the place he once came from, where he might at least not be hunted on sight. Frostbite and freezing were no doubt a bitch, and it’s lucky for him that dying “resets” the system. Good to go, crawl another few painful yards before passing out again. 😉

Out of Rannon’s five closest servants, Akari, Kenji and Azani have all at some point held the position as his First Servant.