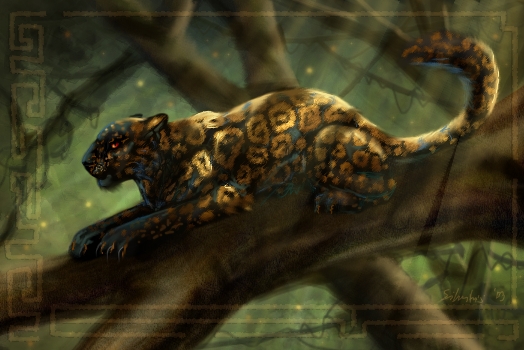 Original Written Work
Characters: The Jaguar King, Father Sun
Summary: A legend from Ku’Ombos, as told by Maqaxha to the ZanTaoyaka children in his care.

“This is a legend from the land of Ku’Ombos…

Father Sun wanders across the sky and turns the night into day, and in His light, all His children are safe. But the great Black Serpent, who hunts in the dark, shuns His light, and always seeks a way to put it out forever…

One night, when Father Sun approached the horizon, the Black Serpent managed to capture Him. He imprisoned Him in his dark world underground, and the whole world became dark as a moonless night. The night never ended, and in the dark, the Black Serpent hunted the Sun’s children and ate them.

So, the world was submerged in darkness and all were very afraid. But the Jaguar King, who hunted in daylight, decided to bring back the sunlight, and he set out to free Father Sun from the Black Serpent. When he reached the Black Serpent’s dwelling, the great Serpent lay in light slumber, having hunted during all the endless night.

The Jaguar King said to the Black Serpent ‘Why have you captured our Father..? Don’t you know that you too are his child, and that our world will die without his light..?’ But the Serpent only hissed ‘The night is my realm and there I rule. Father Sun has had the world since the beginning of time, but now it is mine!’ The large Serpent threw himself at the Jaguar King to devour him, but the great cat was faster.

The Serpent lunged at the Jaguar King again and again, but every time the golden cat dodged his attacks. The sluggish snake became more and more aggravated, and did not realize until too late what the clever cat had tricked him to do; with every evading jump the Jaguar King had made the serpent tangle himself in his own slithering body, and finally he was so snared he could no longer move. Without ever touching the Serpent with his teeth, the Jaguar King had defeated him!

Once again free, Father Sun’s light poured from the sky, and He turned to the Black Serpent with a stern voice. ‘You imprisoned me, and hunted my children in your endless night,’ He said. ‘But you, too, are my child, and I will not harm you. Your own greed snared you – only when you have tasted hunger again your will body be lithe enough to release you. Use the time well to reflect upon your deeds, before you are tempted to disturb the way of things again.’

The Black Serpent felt humiliated, and in his heart he swore one day he would defeat Father Sun once more. But the Sun was wise, and He turned to the Jaguar King who had freed Him. ‘Jaguar King,’ He said, ‘ you who hunt in daylight, and who so cleverly defeated your enemy… I will give you a gift, and a duty. From this day you will carry my light in your eyes and instead hunt in the night, and guard the world against the Black Serpent.’

The Black Serpent heard the Sun’s words and knew he could never again hunt the Sun’s children, and so he bitterly hid in the dark underworld again. And ever since that day, the eyes of all cats glow in the dark with the Sun’s light.”