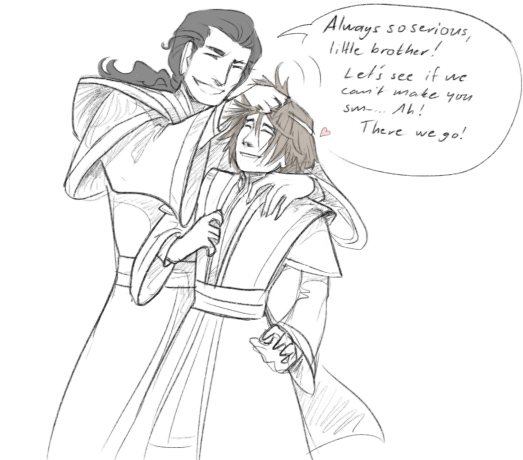 Shayari never had reason to question his father’s judgment; Tenotaka may be a somewhat emotionally distant parent, but for the first ten years of his life, Shayari knew his father loved him wholeheartedly. Losing Merate was a huge trauma to them both, and with her death Tenotaka withdrew even further, and very clearly laid the blame of the Queen’s death on the unwanted child whose birth cost her her life. Shayari was only ten. He was a kid, broken and hurting and he internalized his father’s stance without reason to question it.

It’s not that he didn’t care about his little brother, he did, even loved him, he was still family. But at a subconscious level, he still accepted Tenotaka’s judgment of Rannon as inferior, lacking and unwanted to have around. They also didn’t have all that much contact – Rannon spent very little time at court once he had been sent off to be schooled with the warrior caste and at various seats of learning around Kayalana.

It wasn’t until Islinn did what very few dared and went against the King’s unspoken wishes to usher Shayari to reach out more to his little brother, that Shayari really stopped short and started making his own assessments, not just falling back on ingrained negative habit. Surprised to find the “lesser” brother clever, skilled and knowledgeable, albeit rather guarded and grim. And frankly ten years younger, still technically a child, no matter how mature and disciplined for his age.

The last half year-year or so before Shayari set out on his ill-fated quest was probably the closest the brothers had ever been, with Rannon returned to court (the necessary spare, should something happen to Shayari, gods forbid) and preparations for the journey in full swing.

Rannon adored his older brother, with a mix of shameful envy and hunger to try to be everything he was. And to this day he would vehemently defend him if anyone implied he had ever been anything but a good brother.

In the end, they were both children, both victims of a family tragedy that pitted them against each other rather than uniting them in grief. If Shayari had come home successful to pick things back up, things could well have played out very, very differently. ♥

Anyone who lives or works in the Floating City of Machra-la must wear a permanent crescent brand or tattoo. Lacking the strict regulations of the city proper, the slum’s inhabitants are considered filthy and contagious, and are not allowed to enter the city without permits for specific errands.