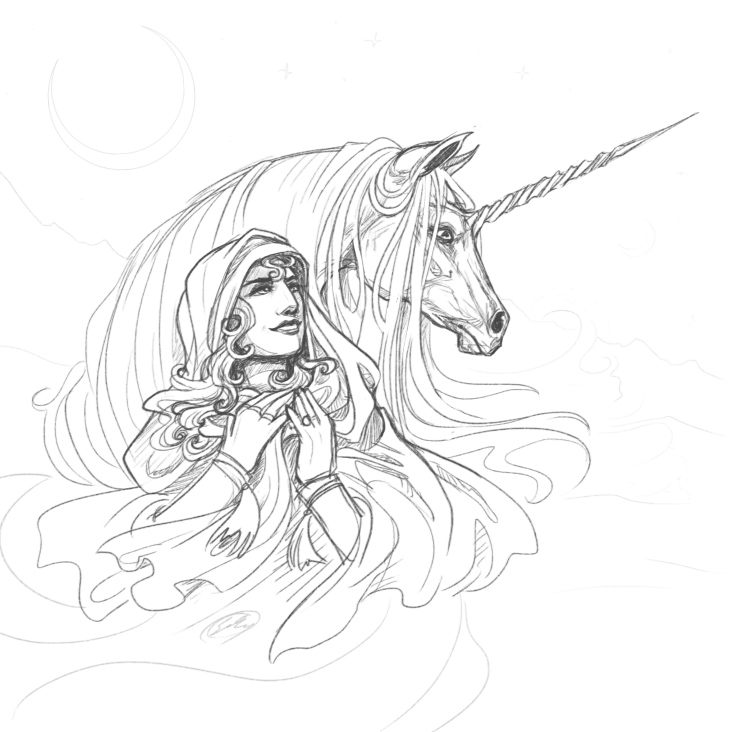 “I’m sorry, brother. I heard father refused you military aid this time, too. I know he’s scared to provoke the Warlock to fall on Sirn next, but me? I’m tired of looking to the North with fear. That Ititshi has kept your throne warm for you long enough. Between you and me, your Carrysh retinue and my private guard…? I think we should go take it back.”

Relonia is great. She started out a typical cliché “arrogant, not-like-other-girls spoiled princess” but I love where her character growth has taken her! She’s still headstrong and rash and arrogant, but there is so much heart there. ♥

Sirn is one of those places I’d really need to stroll around in with notepad out; there’s a lot I still don’t know about it! Lots of inspiration from ancient Egypt, yes, and north Africa/near east in general. A harsh and unforgiving desert kingdom for the most part, although there are grasslands to the north-east (Where Relonia’s mother Eilah hails from) and south, down against the Ku’Ombos border.

In central Sirn, the great river Cal traces a green thread of life through the desert, to finally empty into the great inner sea that I haven’t named yet. The royal family have a summer palace there.

When we first see Sirn, it’s ruled by Relonia’s father, Hanyohl, but I’m 99% sure he dies some time during the time Rion is a prisoner in At-ni Cal – exactly how is something I’ve changed so many times I’ve lost track. (Rion vehemently assures he’s blameless this one time)

It hits Relonia hard since he was practically the one to raise her – her mother has been very sick and bed-bound for a very long time. One good aspect of claiming the medallion, though, is that she finally learns to control its power enough to heal her, and Eilah steps up as de-facto ruler after Hanoyhl’s death.

Rion is an absolute magpie who loves to collect all manners of things, and his pockets will often hold items ranging from invaluable to perfectly worthless – and quite often a snack or two.