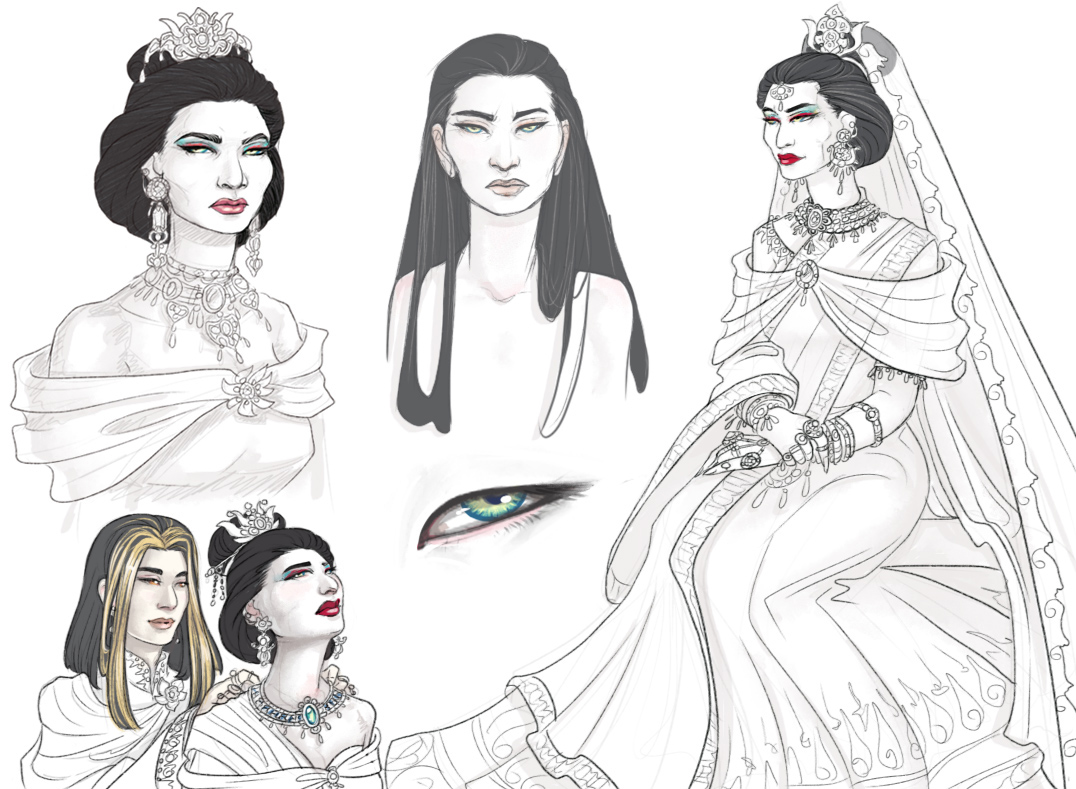 Ebenholtz, the wasp with a deadly sting.

Ebenholtz is a lady of Machra-la – ambitious, ruthless and pettily vicious.

As a little girl, she started her career as an apothecary’s apprentice, but her pretty face gained her a chance to be formally trained as a courtesan. Dancer, singer, player and acrobat – she possesses a razor wit as skilled at reciting poetry as hatching clever schemes, and a willingness to dispose of rivals any way needed to get ahead (her past learning of potions and poisons comes in very handy at times.)

Her features are more northern than those of most Machralese, with a flavour of north-eastern Bahari, and she has some of the most striking eyes of all current characters in Pangaea – a two-colour ombre of azure and citrine. But the competition in Machra-la is nothing if not literally cut-throat, and in the end, beauty, wit and ambition weren’t enough to take her to the very top.

Cautiously reaching out to Narcissus, a young rising star, turned into a beneficial and surprisingly loyal arrangement for them both. After a lethal twisted race to the top, Narcissus ended up the most influential noble in all Machra-la, save Lazuli himself. Ever a comfortable man, he is satisfied with resting on his laurels, though Ebenholtz might not have minded going for the throne itself.

A few years older than her partner, her perceived fading beauty is causing her great distress, turning her bitterer and crueler than ever, certainly not helped by the fact that she often ends up on the receiving end of Lazuli’s malicious little games. He won, and is always happy to rub Narcissus’ face in that fact – often by targeting the few things Narcissus genuinely holds dear.

The negative spiral of drowning bitterness and resentment in alcohol, and obsessively lamenting chances and beauty lost forever, could well have ended in tragedy. But when dramatic events propelled her first alongside Narcissus to alien Ku’Ombos, and later to the court of Kayalana, she was forced to sober up in every sense of the word. While her short stay in Ku’Ombos turned out nightmarish, she found unexpected purpose and surprising joy in mentoring the young crown princess Isokell of Kayalana, becoming the headstrong young woman’s confidant, teacher and not entirely willing partner in crime.