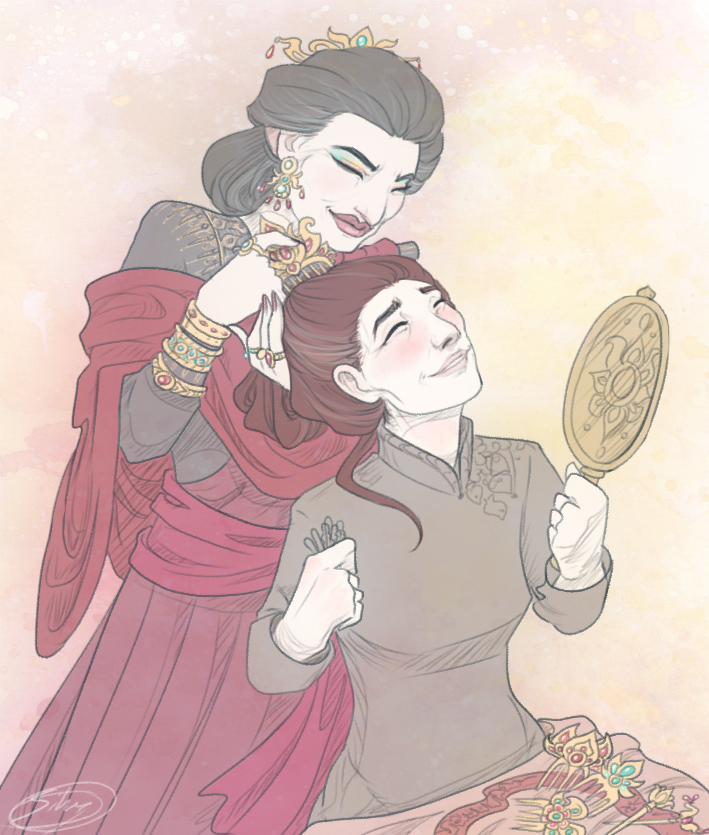 One of the first people Ebenholtz makes friends with in Kayalana – where she’s been taken to recuperate after the illness and assault that nearly took her life – is Nera, Akari’s mother.

Few people could be more different than the humble widow net-weaver from a small fishing village to the north, and the elegant but venomous courtesan lady of Machra-la. But they are both feeling out of place in the royal palace where they’ve come to live, and cautiously interested in the other woman sharing their private wing of the castle.

Ebenholtz has been shaken enough by life’s cruelties lately to be grateful for genuine friendliness and is not beyond playing nice when so called for. And she is enthralled by Nera’s lovely cherry-red hair – “I could have killed for hair like yours,” she says, and probably means it quite literally. The mousy fisherwoman is hardly used to such compliments and is utterly flustered, but also almost girlishly giddy at the unusual attention.

One too timid, one too vicious, neither has had any real, close female friends for a very long time… and for all their differences, it’s surprisingly nice.

Lylacra loved the human concept of poetry and read all she could find, and also liked to compose quite beautiful poetry herself.