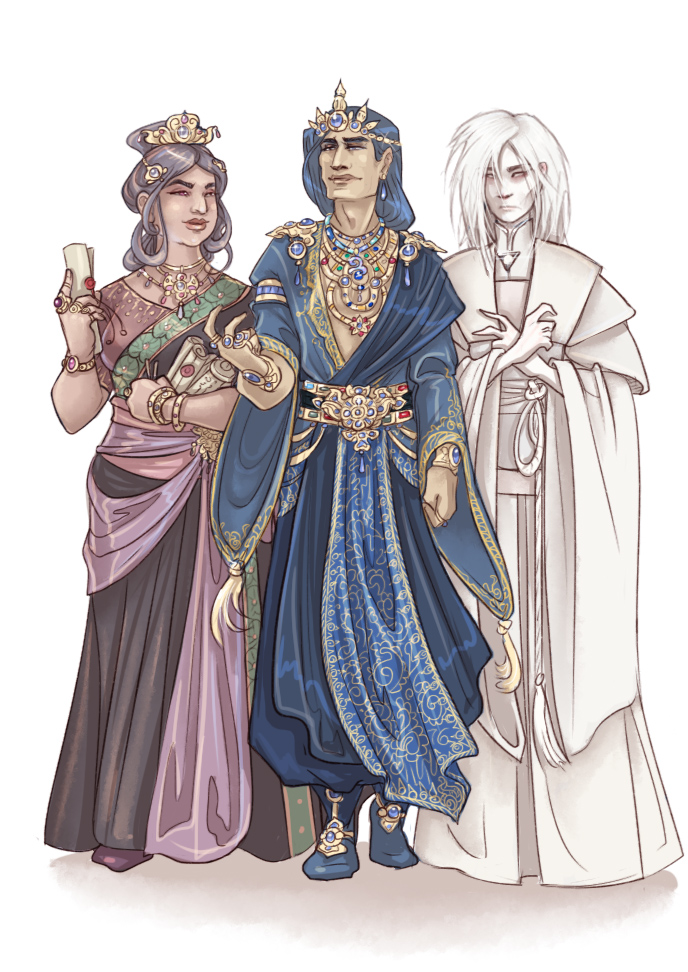 Lapis Lazuli, ruler of Machra-la, and his two closest right-hand-women.

When (left), mayor of the Lotus Court and capable administrator of the city’s infrastructure and daily dealings, and Soothsayer (right), the renegade Chima mystic who is Lazuli’s personal healer and diviner.

The Levels of Machra-la are in many ways small cities in their own right, with a certain degree of autonomy. Each has its own mayor and administration, to handle things at the local level. But the mayor of the highest level, the Blue Lotus court itself, is the one who runs the city in practice. A system grown out of necessity, as the actual rulers of Machra-la tend to get switched out ever so often, little more than gilded figureheads enjoying their time in the spotlight until they’re nefariously replaced. Someone has to make sure the trash is still taken out, and keep track of which sewers need repairing. And currently that someone is When. Equally frustrated and impressed with Lazuli’s insistence to actually get involved in the nitty-gritty details of rule at first, they’ve by now become a well-oiled team of callous competence.

She has second or third generation Ku’Ombian blood, giving her a delightful rosy complexion to go with the Machralese lavender hair, but don’t let the pastels and soft curves fool you. When is every bit as ruthless as Lazuli himself, and should any individual human beings cause the machine of society to snag, they’ll be ground into grease for the cogs.

Soothsayer, meanwhile, is a renegade of the Chima priesthood. The priests are granted longevity and certain mystic powers through a ritual that sears them devoid of all colour and renders them barren. It is absolutely forbidden for an acolyte to undergo the ritual if they might be with child, but in some rare cases, it happens. And ever more rarely, sometimes a fetus survives and is carried to term, born… strange.

Soothsayer was such a child, born in the temple, burdened with “gifts” that have torn her mind apart since her first breath. Bitter and spiteful at the goddess who cursed her with this life and the priesthood who expected her to live out her life in grateful servitude, she left the temple young, and fleeing the winds of war in Kayalana, she wound up in Machra-la.

A Chima-mystic can make a fortune off their services in Machra-la – and the city state offers the very best drugs around, to soothe the screaming in her head, ground her in the here-and-now, or cut all ties to the world for a blissful while.

Lazuli learned of her gifts and offered her a life at his side, a safe haven to live with every comfort Machra-la has to offer, in exchange for her visions and healing powers. Only loosely tethered to the present she is a gaunt white shadow at his side, murmuring truths and warnings and may-have-beens in his ear… All the while trying not to think of the one truth she keeps to herself – the ever approaching day of her own death, that she has known since her first day of life.