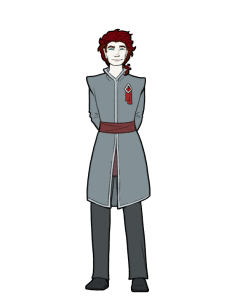 Akari is a talented young grifter, making his living on the streets of the capital during the Civil War alongside his brother Kenji, constantly dodging ceaseless attempts at being drafted into either side’s army.

A natural talent at swindling, pick-pocketing, cheating and stealing, he soon gathers a small gang of equally clever and desperate youngsters around him, making a living in any way they can. His luck eventually runs out, but after a brief brush with the dungeons, he is pardoned alongside many other petty offenders by the new King, and takes up offered work as a kitchen boy in the palace, which means a decent pay and a young man soon bored out of his mind.

So when the King sends out word he is looking for a personal servant for his uncle, Rannon, the pardoned Tyrant, Akari instantly volunteers. Not even the fearsome former King could be worse than scouring pots and pans all day! Seeing promise in the young man, the King chooses him for the precarious position.

At first it seems an impossible clash, the severe and tradition-bound fallen Tyrant and the too-familiar and irreverent street boy. But as fate sometimes has it, the two makes something greater together than the sum of the parts, and slowly their cooperation grows from necessity to guarded trust, and finally true affection.

Soon Akari invites his former friends to join him in service, and after a bumpy start of mutual skepticism, the motley crew more or less adopts their cold new master as one of their own, becoming an important keg in the machinery of Kayalana politics.