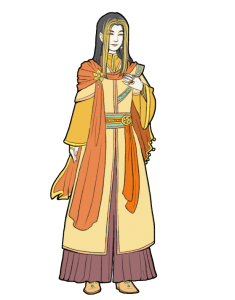 Narcissus is a highly refined nobleman of Machra-la, and once most serious rival of Lapis Lazuli in competition for the throne. Realizing at the very end that it was a game he would not win, he graciously conceded and swore his allegiance to the new lord, and consequently had his life gallantly spared. A rare thing for a former rival of the new ruler.

Partnering up with the beautiful, vicious and ambitious Ebenholtz, Narcissus is a shining socialite star of Machra-la, and one of the few people Lazuli would count as much friend as enemy. Suffering his ruler’s often cruel whims with endless grace and patience, Narcissus knows very well to be grateful for his continued existence.

Exquisite, vain and very much adverse to the concept of honest work, Narcissus prefers to keep out of the cut-throat game of Machralese politics these days, in favour of parties, leisure and luxury.

A sweet and gilded life that is brutally turned upside-down when he is accused of having collaborated with assassins in a far-reaching coup to have the newly declared King Lapis Lazuli of Machra-la murdered and replaced. His life spared only because of his delicate friendship with Lazuli, he is sent in disgraced exile to the Arani kingdom of Ku’Ombos, at the ends of the known world, trying desperately to build his life back out of the pieces.

In Ku’Ombos, he meets the equally exiled former Tyrant of Kayalana, Rannon ZanTaoyaka, and through their shared adversity, the two become unlikely allies and friends.