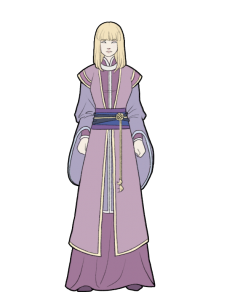 A long awaited heir to secure the ZanTaoyaka succession, and a living symbol of unity between Arani and Ititshi with her mixed parentage, Isokell had great expectations to live up to even before her birth. But when the princess was born blind, many saw it as an ill omen.

In his heart certain that his daughter’s blindness was divine retribution for his own past sins, Rion desperately tried all in his and Relonia‘s power, and even that of the Chima priesthood to restore her sight. But while the girl was hale and spirited in every other way, her eyes refused to respond to the light.

A clever and adventurous little girl, Isokell nonetheless grew up severely overprotected and doted upon by the court and her well-meaning parents, who could see little further than her disability. The only one refusing to restrain her curious nature was Rannon, who knew she would need to learn lessons both easy and hard to prepare her for the challenges of rule she would one day face. Much to the king’s dislike, he curtly encouraged her in her exploits, and reveling in the small measures of freedom, she grew to adore his company.

But as time passed, ill-natured rumours began spreading that the blind child princess was becoming little more than a pawn in the former Tyrant’s hand. To protect her, Rion finally ordered Rannon sent away from court, as an emissary to faraway Ku’Ombos, in thinly veiled exile.

Shocked and heartbroken, Isokell felt her beloved grand-uncle’s fate was her fault, and no longer able to trust the parents who had sent him away, she closed in on herself, becoming from then on a silent and seemingly demure and well-behaved child. But in her heart the fire only grew fiercer, and remembering Rannon‘s terse guidance, she rebelliously pushed the boundaries of her limited existence as much as she could – often in secret, knowing her parents would stop her if they ever knew. Her sister Ziradess would often gladly come to her aid, however, and use her own wild antics to distract Isokell’s caretakers, allowing her to slip away from their watchful eyes from time to time.

Her senses unnaturally acute, she taught herself to read with her fingertips, the whisper of ink against paper clear to her, and hungrily she read and studied and learned, patiently honing knowledge and wisdom into her weapons.

When Saya Ebenholtz of Machra-la was sent to the Kayalana court to be healed from the illness and abuse she had suffered in Ku’Ombos, Isokell curiously sought the recovering courtesan out. First and foremost yearning for any news of her grand-uncle, she soon grew to like the Machralese lady for her own sake. Flattered by the crown princess’ attention, Ebenholtz became a riveting teacher, clever and waspish – and knowledgeable of many fascinating things not encountered in the princess’ books.

Drawn in by the young princess’ charisma and strong heart, Ebenholtz found herself more or less willingly becoming an accomplice in Isokell’s increasingly bold schemes for freedom, persuaded into helping her craft disguises and assisting her in escaping the palace for exhilarating tours of the capital.

When Rannon and Narcissus were finally welcomed back home after their ordeal in Ku’Ombos, Isokell took great care to appear distant and unmoved, dreading that any enthusiasm at her grand-uncle’s homecoming might cause her father to send him away again. But desperate to spend time in his company, she hauled in the highly reluctant Ebenholtz to help her. Crafting the alias “Aurora”, she dressed in Machralese garb and changed the colour of her hair, her mixed heritage now a perfect part of her disguise, and had Ebenholtz introduce her to the returned diplomats.

Certain that her sharp-eyed uncle would cast one glance at her and ask what she thought she was doing, she was thrilled when even he fell for the illusion. Rejoicing at meeting him again, she spent the evening happier than she had been in a very long time. One evening became more, and in her young wild heart, her feelings for him rapidly changed from those of a little girl to those of the woman she was growing into. As Ebenholtz watched on in helpless, mortified horror, Rannon found himself equally mesmerized by the young Aurora’s sheer delight and affection, and before long they became lovers.

For a short while Isokell lived in euphoria, more alive than ever before in her constrained life, madly, deeply in love.

Then, like a slap to the face, she learned that she was with child. The reality of what she had done, and the consequences if anyone would ever find out came crashing down, the blissful illusion cruelly shattered. Unable to bring herself to abort the pregnancy, Isokell desperately wished for some small proof of the love she had shared to live on. With Ebenholtz‘ nervous help, she carried the child in secret, then gave him up to a foster mother at his birth.

As joyous as she had once been, as sorrowful she now was. Dedicating herself to the life of politics, she could only watch her loved one from afar, and his heartbroken distress at Aurora’s sudden mysterious disappearance both pained and consoled her.

When Rannon one day returned from Machra-la bringing with him the once-prince of Ku’Ombos, Maqaxha, she could not help but find her curiosity piqued. A pitiful, broken creature, who had fled the jungle kingdom after murdering his father and ended up in basest slavery, the former prince was now blind like her. Knowing that he had once been a friend to Rannon, and aching to learn of some more small slivers of her beloved’s life, she rashly took Maqaxha into her protection by naming him her First Servant. This maneuver, effectively forestalling his extradition, caused an uproar not only within Kayalana itself, but drawing ire from Ku’Ombos and Machra-la as well.

But tired at last of bowing to the wills of others, steel at her core, she refused to give him up. In the end the queen of Ku’Ombos declared that the lowly slave could not possibly be her lost brother, and unable to press their claims without calling her a liar to her face, Machra-la and Kayalana also reluctantly chose to stand down. Desperately grateful for Isokell’s intervention and protection, Maqaxha swore his undying devotion and loyalty to her, and in the ruined prince she grew to find an unlikely friend and companion.

Still aching with love for the one she could never have, she lived on her life for Kayalana, a dedicated princess and intuitive politician, though ever stubbornly fending off the persistent attention from suitors and admirers.

But then one day Ebenholtz sent her a message that would change everything. In code it let her know that the young messenger who had delivered it was none other than her secret son, Karaon, whose foster mother had died, leaving him to seek out his birth mother. Overcome with tears, Isokell embraced her lost child, and swore that she would never leave him again. Knowing that he would never be accepted in Kayalana with his scandalous parentage, she decided to flee with him in secret, turning her back at last on suffocating royalty and duties. On her way, she finally went to face Rannon and tell him the bittersweet truth of Aurora, and the child they had conceived. Leaving him stunned and broken, she vanished into the night, crossing the mountains with Karaon and going into hiding in Sirn, living for a while in the simple bliss of being mother and child.

But once overcoming the shock, Rannon tenaciously tracked them down, determined to shoulder his part of the responsibility – and wishing anxiously to meet his unknown son at last. Loving him more than ever, Isokell asked him to stay with them, that they may be a whole family, together. Knowing of a hundred well-founded reasons why it couldn’t be, still reeling with the remorse and shock at unknowingly having been so involved with his little grand-niece, he gently but firmly turned her advances down.

But in the end, the love they had once grown for each other was bright and true, and its radiant light would not be tempered by reason or convention. And so, for once putting their logical, dutiful minds aside, the two finally succumbed to their hearts.

Where the eastern highlands of Carryn-yehl steep into the valleys of Sirn is a vast series of thunderous waterfalls called Vidanfall, marking the border between the two kingdoms. Its waters feed the river Cal, bringing life to the arid desert.