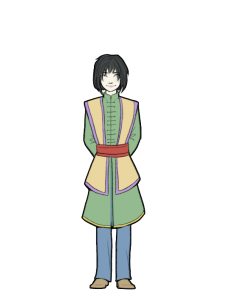 Karaon is a carefree and frighteningly clever child; the secret lovechild of princess Isokell ZanTaoyaka and the fallen tyrant, Rannon.

Conceived while the princess was in disguise to seduce the man she loved, her realization that she was pregnant sent her sweet illusion of happiness brutally crumbling. Yearning for some small proof of the love she had known to live on, she bore the child in secret. He was given up to a foster mother in Bahari upon his birth, never to know who his real mother was.

But as his foster mother, not a young woman, lay dying, she confided in the young boy the one thing she had been given to know of his true parentage – to seek out saya Ebenholtz in Machra-la, a friend of his mother’s, who might send him on the right way. Only a child of seven, but gifted with all the brilliance and perceptive nature of his parents, along with a sunny nature and charm all his own, he set out on a long and perilous journey to find his family.

Upon meeting his real mother at last, she embraced him in tears and promised she would never leave him again. Knowing that the truth of his out-of-wedlock birth and true parentage would never be accepted by the court or people of Kayalana, she fled with him in secret, and went into hiding in Sirn, turning her back on royal privilege and duty, content to just be with her child.

But once learning the truth, Rannon painstakingly tracked them down. Having himself grown up with a cold and distant father, the once-tyrant somewhat haltingly attempted his best to be a loving parent to his son, and for a short while, the odd little family was happy.

But as both parents knew, they would need to return to Kayalana in the end, to explain everything to her parents, and try to figure out how to go forward from here, caught between duty and love.

Atop the high spire at the center of Hope burns a sacred white flame that never goes out, guiding travelers to the city.