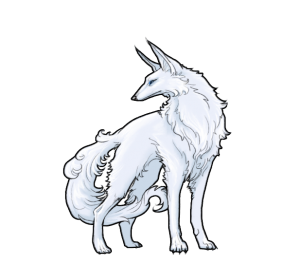 Lylacra is an ylvain, a highly intelligent species of canines living in the mountains.

As a pup, she lost her mother and siblings to a trapper’s snares, hunted for their fine furs, and would doubtlessly have met the same fate. But Rion, the little boy sent into the den to scout for stragglers, saw the fear in her eyes, and in that moment her rare white color seemed so reminiscent of his own loathed pale skin. In a small, brave act of rebellion he lied to his master, claiming the den empty, allowing her to live. Secretly naming her her after the brightest guiding star in the sky, he would return to her as often as he was able, to sneak her preciously hoarded food and spend time in her company.

Growing up together, the two orphans developed a deep bond, and whenever the boy was out foraging alone, she would spend her days at his side. Watching over him as he did her, she was ever only just out of sight, following at a safe distance whenever he and his forbidding master set out on their long hunts. But one day she came too close, trapped in those hated snares at last, about to be slain by the trapper who had once claimed her family.

But returning just in time, clenching the dark amulet he had claimed in the deepest heart of the mountain, Rion instinctively awakened its power, taking his keeper’s life to save hers.

With the powers he now held, the boy gave her the gift of human speech, which amused her greatly, and the more she sniffed out the trails of words, the more she found her way of thinking changing, somehow ylvain and human at once.

No longer forced to skulk in shadow out of fear from human violence, they boldly set out to face the world together, and for a short while, life was simple and they were happy.

But as time passed, and Rion was forced to use his powers again and again to keep them safe, she felt a darkness grow in his heart. Slowly consumed by bitter hatred, he was no longer content to only strike back when attacked, but sought out his human enemies to confront them and kill them wherever they went. With ill ease she witnessed violence begetting violence, and the more humans that died, the more sought to kill them in return.

Finally they reached the Carrysh capital Kherann, where Rion and his legions of shadow-creatures faced the human army in a great battle that would seal the kingdom’s fate. But the humans were no match for the dark powers her loved one now commanded, and in triumph Rion plunged his blade through the king’s heart, claiming the land as his own.

All people slain or hunted into exile, they now ruled a kingdom of their own, and set out exploring the spoils of the human world with great curiosity and wonder. Discovering yet another way to merrily chase the words of human language, she delighted in the written word, loving poetry most of all. Still her heart was heavy, for she could see the dark hate still festering in her companion’s soul, knowing that such bitter malice would eat him alive in the end. But still they loved each other dearly, and spent all their time together, as united against the world as ever.

Then finally came the aftermath Lylacra had always dreaded. Corrin, the surviving prince of Carryn-yehl, and princess Relonia of Sirn came to reclaim the land, and have their vengeance upon the dark-hearted creature on its throne. They battled fiercely, defeating Rion and stealing the source of his powers, then came upon her.

Rion‘s eyes begging her to run, that he would not be forced to watch as they killed her, she chose her own fate and leapt from the window of the high tower, though her heart ached to turn her back on him in their last moments. Falling forever, she finally hit the dark waters of the moat far below, sinking lifeless into the deep, cold depths.

But some legends whisper still of a ghostly white ylvain roaming the forsaken wilderness, crying mournfully for the loved one she lost.

Before turning to Chima, the people of Sirn worshiped the Sun, like the Ku’Ombians. Traces of this religion still remain in the symbolism of the winged sun-discs often worn on royal’s crowns and insignias.