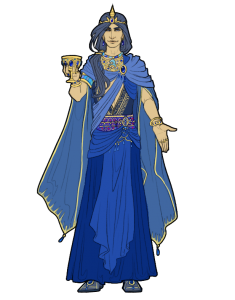 Unlike many previous Machralese rulers, who have been little more than temporary glamourous figureheads, Lazuli is a very sharp politician with a steady grip on the reins, who immediately made sure to make himself indispensable.

Several years into his reign, tradition-bound Kayalana to the north extended previously unheard-of relations of trade and cultural exchange with Machra-la, and the prestige and influx of wealth brought on by the relationship (not only between nations – the liaison of Lazuli and King Rylerion of Kayalana is a well-known “secret”) only further boosted his power.

As Kayalana also entered cautious relations with the Arani beyond the mountains, Lazuli made sure to advance Machra-la’s interests even further, making the small nation one of the first to sign the treaty of trade and peace that would over time lead to the Alliance and Council of Nations.

Emboldened by his supreme power, and inspired by his mainland counterparts, Lazuli did the unthinkable and declared himself not only ruler but first King of Machra-la, founder of a dynasty, making the power inherited through birth of blood rather than spilling someone else’s. This was not a welcome turn of events for many of the power-hungry Machralese, and he just barely avoided the blades of an onslaught of assassins, the result of a far-reaching plot to end his life and arrogant ambition. A lot of blood flowed in retaliation.

Through a mix of absolute ruthlessness and political genius, Lazuli remains steady on the throne of Machra-la, advancing its wealth, strength and glory – as an extension of his own.

The matriarch of the Clan of the Plains is Medreth, Queen Eilah’s older sister. She governs the fertile Nehren region in north-eastern Sirn.