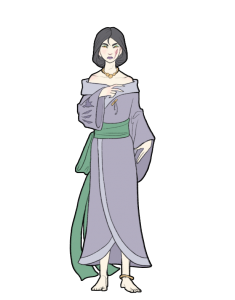 Crow is a young courtesan of Machra-la. Born on a remote island in the Bahari archipelago, he was sold as a young boy to Machralese merchants in exchange for medicine when his tribe came down with a sickness that threatened to wipe them out.

Torn from his island he was brought to the bustling, lethal madness that is Machra-la, brutally thrown straight into its filthy underbelly. Many young slaves would break and die within the first few months, but the boy hardened his heart, buried all memories of his old life forever, to carve out survival, tooth and nail. Jaded bitterness came very early, it was the only way to stay alive.

And for all the horrors endured, given time, he not only lived, but thrived. He learned fast to play the game of use and abuse, of scheming, threats and favours, attracting wealthy and powerful patrons, using them for all they had, then moving on. With his beauty, grace and utter ruthlessness he climbed his way up from the seediest brothels at the very bottom, into the finer Houses up in the central city, and even higher, reaching a very respectable position in a fine establishment at Level Four. Earning the prestigious gem-name Hematite, and one day finally receiving an invitation to Level Five, the second-to-highest district of the city, practically nobility.

Then a rough customer (quite possibly bribed by some bitter rival or even the House he was turning his back on) got to him before his contract was officially moved, damaged him very badly and very nearly killed him. It cost him everything, even his precious name, to pay a renegade Chima-healer to save his life and heal the worst of the damage. But while he did live, he couldn’t afford to have healed the deep scar across his face.

Damaged goods, with nothing to his name, he was kicked out from his old House without much ceremony, to start all over.

The beauty that had been his strongest bargaining chip from his very first days in Machra-la now in ruins, it turned out that the trail of people he had used and left behind was coming back to haunt him. All doors remained closed.

In the end, he had to swallow his pride and go to the slave market to sell himself into service, hoping to be able to eventually earn enough money to both buy himself free and have his face healed. That’s where Kestrel, a pimp from the Floating City at the very bottom of the slums, first came upon him, making him a casual offer and having it contemptuously thrown back in his face – the former Hematite might be broken, but not ready to plunge deeper than he’d ever been.

But it became painfully apparent, as the hours of the day passed, that no-one else was interested, not when there were prettier, whole faces for sale all around.

Kestrel came upon him again as the market was closing, and gently offered a cup of hot spicy kesha, to talk about his offer again. Biting down all he no doubt wished to say, and drawing tatters of pride around him, this time he accepted.

What Kestrel had to give was far less than he had hoped for – meager earnings, and another scar to afford removed – the mandatory brand for those working in the slums outside the city walls. But at least he did offer him a percentage of his earnings, not outright unpaid slavery. And he was all out of options. So in the end he sold himself into Kestrel’s service, took on the vacant name Crow and headed into a both alien and all-too familiar life in the Floating City.

Where he met Kitsune and found an entirely new obsessive ambition in life.

Rylerion inherited the “ri” syllable in his name from his father, Shayari – who in turn inherited it from his grandmother, Queen Zuriva.