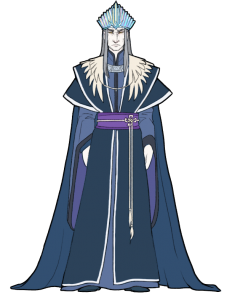 Tenotaka was a dignified king of Kayalana, and the father of Shayari and Rannon. An austere man prone to dark moods, he found his life’s only light and warmth in his beloved queen, Na-Merate.

But after the queen died while giving birth to their second son, the king’s already bleak disposition shifted towards the colder for good, living on for duty alone, and for many long years no smile or warmth would ever reach his eyes. Unable to forgive his youngest son for bereaving him of the one love of his life, he sent the boy away young to be trained by the Karakali warrior caste and the country’s best scholars, away from court and his sight.

Only when his beloved older son, Shayari, presented him with his first grandchild did it seem his heart might thaw at last. As sunny and happy as his lost queen, the little boy finally coaxed the frozen king to smile again, for the first time in over a decade.

But only a few short years later Shayari, his wife and the little boy were lost in an earthquake in the mountains. As the news reached the old king, his broken heart shattered for good, and he died only a week later, thrusting his neglected youngest son unprepared upon the throne of Kayalana.

The land east of Carryn-yehl and Sirn is called Ngali.