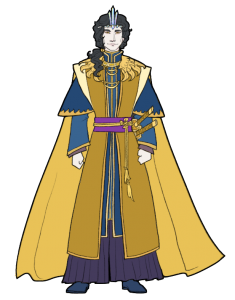 Shayari was the oldest son of king Tenotaka and queen Merate of Kayalana, and older brother of Rannon.

Losing his mother young, and watching his father’s slow, painful decline into dark despair, he spent much of his time dreaming up grand plans to lift Kayalana’s spirit and his father’s heart again.

A bold and warm personality, he was not content with mere dreams, however – he nurtured a vision to reach out to the mythical golden Arani people beyond the the mighty mountain range at the edge of the known world. To find the truth behind the legends, learn about their ways, establish trade and cultural exchange and finally usher in a new era of peace and prosperity on a scale never before dreamed of in all the world.

Sending messengers across the mountains, he managed to establish guarded contact with one of the Arani kings, and it was finally decided he would travel to meet with him, alongside his wife Islinn, their little son Rylerion and a grand retinue, making real his ambitious dream at last.

But fate would have it differently. While crossing the mountains, a mighty earthquake struck, drowning the Kayalana procession in landslides and avalanches. Sheltered in their litter, only Shayari and his family survived.

The path home collapsed and obstructed, the only way forward was onward into unknown territory, and for several days they struggled through the snow, scree and bitter cold.

Coming across an Arani village, remote and isolated, they were met not with the peace the prince had dreamed of, but superstition and fearful hatred. At their hands, Shayari and Islinn met their fate, leaving only the small boy stranded on the alien side of the mountains, far, far away from his once home.