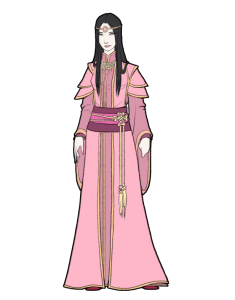 A kind and gentle but strong-minded young woman, she supported her husband in his grand ambition to bring about world peace, but also helped bring him down to more earthly matters when so needed. One of the few who dared subtly go against king Tenotaka‘s unspoken wishes when it came to his family, she was rather fond of her husband’s grave little brother Rannon, and encouraged Shayari to make peace closer to home as well.

When it seemed her child would be born on the forbidden night between the old year and the new, where no living creature must be brought into the world, she did everything to delay his birth, almost losing her own life in the process. But the old king granted an exception from the ancient tradition, allowing the child to live even should he be born before dawn broke, thus sparing both their lives.

Some years later, Shayari‘s mission for peace was finally set in motion, and she journeyed by his side along with their little son to meet with a king of the mythical Arani. But an earthquake struck as they were crossing the mountains, claiming the lives of their entire retinue, leaving the royal family the sole survivors in the frozen wilderness.

Desperate for shelter, they finally came upon a remote Arani village, but were met with fear and violence rather than aid. She died alongside her husband that cold night, leaving their child alone and stranded in a world not his own.