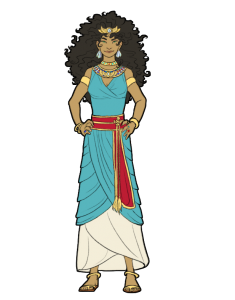 Her demure sister’s opposite in many ways, Ziradess is wild and impulsive, with a great hunger for action and adventure, rarely capable of sitting still for long. Although sometimes destructive in her lack of forethought, she has a great heart and always means well.

As her blind sister grows older and feels more and more constrained by her lack of freedom, Ziradess is more than happy to help concoct and carry out bold schemes to help her sneak past her guards and sitters, to know the forbidden taste of perilous and heady freedom from time to time.

Always intended to be raised close to her Sirn heritage, Ziradess spends a lot of time in her mother’s homeland once old enough to leave home for longer periods of time, growing close to the maternal side of her family, and eagerly picking up the ways of the desert kingdom.

Ever following her passionate heart, she loves often and strongly, but rarely for long, leaving many a wistful love in her wake.

While not as warmly welcomed by just everyone, she efficiently silences those who claim that her Ititshi blood makes her unfit for Sirn royal titles by going into the desert with dagger and spear alone to fight a man-eating lion, like her mother once did to prove her courage. Possessing an innate skill with animals, however, she ends up befriending the scarred old beast and bringing  him home with her. Even the most ardent of her adversaries tend to fall very silent when stared down by the fearsome large cat.

Relonia is the first queen of Kayalana in roughly 40 years.