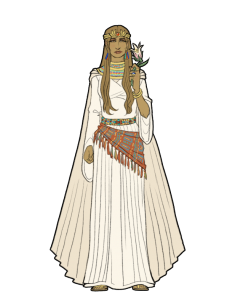 A lady of the Clan of the Plains, originally hailing from the fertile northwestern Nehren region, she found the barren desert surrounding her new home in the capital bleak and harsh. She dedicated herself to the palace gardens to alleviate her homesick heart, and under her care, they flourished into legendary beauty.

But after several happy years with her family, she fell ill, her once-strength waning, and her faltering health had her confined to a tower overlooking her beloved gardens, no longer able to nurture them with her care.

As Carryn-yehl to the north fell to the dark Warlock‘s hordes, the Carrysh prince Corrin sought refuge at the court of Sirn, and the empathetic young man often sat with her, speaking softly of the former lives lost to them, easing her pain with his gentle healer’s heart.

Secretly embarking alongside  Corrin on a quest to fight the Warlock and free Carryn-yehl, Relonia returned home with magic powers beyond compare, torn from her enemy in the heat of battle. While struggling to master them, she finally used their might to heal the sickly queen at last.

But the joy at court turned out short-lived – only a short while later, king Hanyohl died. With a deeply saddened heart, Eilah appointed her daughter her co-regent, splitting her regained strength between politics and tending to her beloved gardens once more.

Rylerion inherited the “ri” syllable in his name from his father, Shayari – who in turn inherited it from his grandmother, Queen Zuriva.