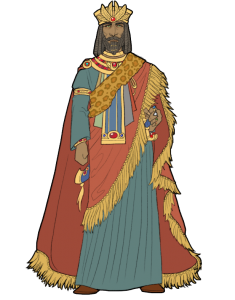 An imposing man of great authority, he ruled side by side with his queen until her health declined, and she was forced to retreat from court and her royal duties, leaving the burden his alone. A great influence on his unruly daughter in her sickly mother’s absence, he taught her much of pride, courage and justice.

When Carryn-yehl to the north fell to the Ititshi Warlock‘s dark forces, Sirn cautiously opened its arms to its fleeing people, and the royal family welcomed among them the fugitive prince Corrin as one of their own. The influx of foreigners was not without friction, but for the most part, the two peoples managed to live peacefully together.

Often the distraught young prince would ask king Hanyohl for the military aid to free his fallen homeland, but wary to bring the Warlock‘s dread powers down upon his own people, the king ever kindly but firmly refused.

But with a heart as fierce as her father’s, his daughter joined the prince on a secret quest to deliver Carryn-yehl from the darkness, and together they vanquished the Warlock and brought him back in chains to Sirn for judgment.

Wanting nothing more than the dire threat disposed of once and for all, Hanyohl called for instant execution, but in accordance with the ancient laws of the desert, Relonia lay claim on her prisoner’s life, and the right to determine the time and manner of his death. Unable to refuse her without shaming her in front of the Clans, the king reluctantly agreed.

As fate would have it he would see his daughter use the powers she tore from the Warlock to heal his queen at last, only a short while before falling victim to an accident and perishing himself.

Sjali, the fine draped cloths of Machra-la, are traditionally worn by all genders, either loose as shawls, or incorporated into clothing. They are often given and received as gifts, and are used as markers of wealth and social status.