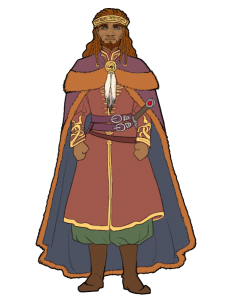 Carryn was the king of Carryn-yehl, the land traditionally named after its ruler, husband of queen Neyrika and father of prince Corrin.

As a young king, he came upon a beautiful woman in the woods while out hunting, and bewitched by her charms, he married her and made her his queen. She bore him a son, the fair prince Corrin, and shortly after vanished without a trace back into her wilderness.

A good father and king, he raised his son with great love, even though he was at times bewildered and alarmed by the supernatural gifts the prince had inherited from his fey mother.

Unable to believe at first the rumours of the onslaught of the Ititshi Warlock as his shadow hordes fell upon the land, king Carryn nonetheless soon gathered his forces and fought bravely to protect his kingdom and people.
But in the end, the Warlock‘s powers proved too great, and the noble king fell in battle at Kherann, leaving his son fatherless, and the helpless people of Carryn-yehl to flee or face certain slaughter.