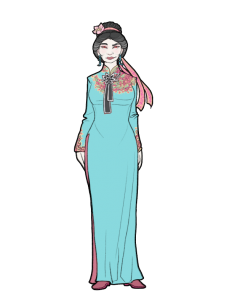 Meishi is a shrewd woman, jill-of-all-trades and street walker, who knows the capital of Kayalana and its people like the back of her hand.

Business is good after the end of the Civil War, with hoards of young countryside men and women in town, brimming with the thrill of being alive, equal parts lost and mesmerized by all the big city has to offer.

One such young man turns out more interested in her vast knowledge and street-smarts than any carnal company – amused, she lets him buy her a drink or two and talk all night. Come morning, he thanks her for her invaluable intelligence, and offers her a very different job, as one of his formal advisors. Only then does she learn that the polite young man she has spent the night with is Rylerion ZanTaoyaka, just crowned new King of Kayalana. Somewhat mortified, she accepts.

Offering a very different perspective than his military advisors, her counsel and clever business-sense becomes integral to the new King’s rule. One of the few people he really grows to trust, she is soon also appointed his First Servant, alongside her position as a Councilwoman.

Seeing past the regal facade like few others, to the rather lost and fractured young man beneath, she grows to care for him like the son she never had. Sometimes true family is not about shared blood, but understanding, acceptance and unconditional love.

Before being chosen to train as a courtesan, Ebenholtz was an apothecary’s apprentice in her youth, giving her much insight in the world of poisons and antidotes.