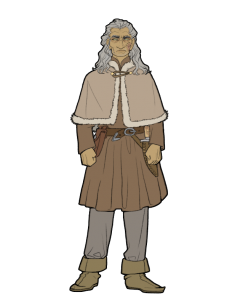 Gramo is a reclusive trapper in the highest and most remote Carrysh mountains. A very no-nonsense man with little patience for superstition, he was passing through the village where Rylerion‘s parents were killed and stepped in to save the child’s life. Mostly out of practicality – an extra pair of hands could be useful – but also out of distaste for the villagers’ irrational fear.

An austere and hard master, he reared the boy to work hard and expect little. While not sharing the villagers’ insistent belief in Ititshi being monstrous undead ghouls, he still considered the child to be not entirely human, and was well aware there would no doubt come a day when they would come for the boy to burn him too, rather than let him grow into adulthood.

Brutal in his discipline and unsavoury in his carnal needs, he does still care in his own way for the creature in his care, and they make for an makeshift family of sorts, facing the challenges of the desolate wilderness together.

Akari and Kenji hail from a small fishing village north of the capital, where their mother still lives.