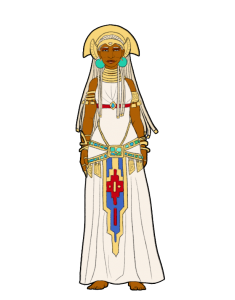 The youngest of the elderly king’s children, Shaqani loved nothing more as a child than to spend her time around her older brother and his mentor, Rannon, the diplomat from Kayalana. Overhearing them speak of their nations’ respective faiths, customs and histories, she learned much of both the madness and wonders of the world.

But when the old king suddenly died, people soon began whispering of an unnatural death, and of poison. Swiftly suspicion shifted to Narcissus, the diplomat from Machra-la, his people being well-known users of poison and other such unsavoury means of advancing their ambitions. Learning of the close nature of his relationship with Rannon, both diplomats were thrown in the dungeons, prince Maqaxha sparing no means in forcing them to confess.

It broke Shaqani’s heart when a witness came forward to reveal the truth; that it was really her older brother who had poisoned their father to claim the crown for himself. The prince vanished into the jungles, believed dead, and the empty throne left Ku’Ombos spiraling into chaos. Maqaxha had been the king’s only son and heir, and all the king’s daughters were long wed and bound to their husbands’ families – and while many husbands tried to stake a claim, their blood was not of royal lineage.

In the end Shaqani stepped forward and argued that as the only unwed daughter, the one child still of the royal name, she should wear the crown, to hopefully bear a male heir in the future, the lineage kept secure.

No-one was very pleased with this solution, but lacking better options, the nobility, priesthood and people finally agreed. Releasing the wrongly accused diplomats from their prison and setting out to repair the political damage done by her brother, Shaqani took on the kingly name Shaqanixha, becoming the first ever female ruler of Ku’Ombos.

Maqaxha is actually not all that good at playing the panpipes – it was a gimmick he was demanded to learn in the Floating City to draw in customers, and his playing is simplistic at best.