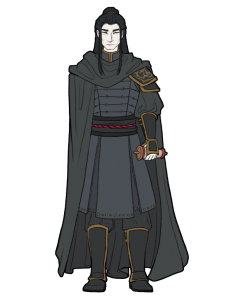 Jarezin is the Shantu of the Black Panther, commander of the spies, enforcers and assassins of the Karakali warrior caste. A seemingly emotionless man who says little but sees much, he worked as Kamiyeh‘s eyes and right hand during the Civil War.

One of the foremost thorns in Rannon‘s side, Jarezin was responsible for a constant barrage of assassination attempts on his life (failed), and on all those close to him (highly successful), leaving the Tyrant increasingly robbed of allies. Unlike most of his fellow rebels however, he harbours no particular personal spite or hatred against the former King; the efficient onslaught against him, his administration and few friends was all professional.

As such, these two cold strategists now manage to work reasonably well side by side on the new King’s council, in a guarded air of grudging mutual respect.