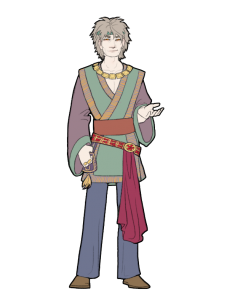 Kestrel is a pimp and entrepreneur in the Floating City of Machra-la, and is unlike many of his countrymen a reasonably decent and sympathetic fellow. His father being a Bahari nobleman and his mother a Machralese courtesan, he grew up in Bahari, and inherited a small sum of money when his father passed away.

Figuring he would rather be a nobleman among whores than the other way around, he set out to try his fortunes in Machra-la, and has run a modest but successful business in the Floating City for many years.

His congenial nature and nose for mutually beneficial arrangements has gained him many unlikely friends and allies, helping him literally stay afloat in the cut-throat world of Machra-la’s darkest underbelly.

Zenaqet is a chess-like boardgame played with blue and yellow pieces, representing the opposing forces of fire and water. Fire, the aggressive force, always makes the opening move.