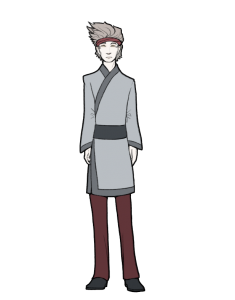 Kann is a rather shy and subdued young man with a brilliant mind without match. Outcast during the Civil War, harassed on the streets for his physical disability and social awkwardness, he was befriended by the Sinju brothers and soon became an integral part of their street gang.

When Akari suggests the whole gang join him in serving the fearsome fallen Tyrant, Kann is sorely distraught, certain he won’t make the cut – but every one one of his friends swears that they will offer their service all together, or not at all.

As it happens, Rannon immediately recognizes the young man’s genius, and for the first time in his life, Kann finds himself chosen before all others. While he thinks the prince’s cold nature rather forbidding, he is extremely loyal, and invaluable in helping his new master collect and sift through intelligence on every smallest affair going in Kayalana.

Where the eastern highlands of Carryn-yehl steep into the valleys of Sirn is a vast series of thunderous waterfalls called Vidanfall, marking the border between the two kingdoms. Its waters feed the river Cal, bringing life to the arid desert.