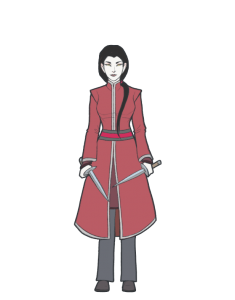 Azani is a harsh and street-smart young woman, grown up in the seedier alleys of the capital during the Civil War, and no stranger to fighting and defending herself.

When Akari invites her to join his gang of misfits, she is standoffish at first – she has managed well on her own so far, and placing trust in others tends to be a weakness rather than strength. But after a few run-ins with them, surprised to find them not only still alive but thriving, she decides to cautiously give it a go, and soon becomes a valued member of the group.

When the gang goes along with Akari‘s plan to offer their services to the fallen Tyrant, she certainly has her doubts – the palace may be prettier, but no less dangerous to navigate than the darker parts of the city.

Against her will, she slowly finds herself growing a lot of respect and loyalty for the bitter once-king, however, and comes to know and care for him better than most.

Kesha is a hot, spiced, coffee-like drink popular in Bahari and Machra-la, and to a lesser degree Kayalana.