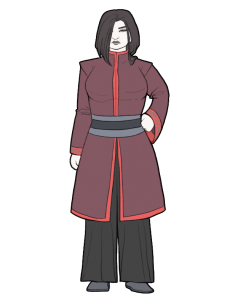 Edra is an imposing figure, and makes up for her lack of spoken words with sheer stature. A trained Mishra-healer, she knows perfectly well how to set a bone – or break one. Taking on odd jobs as raw muscle, her first meeting with Akari‘s street gang is by thwarting their plans to rob her employer, leaving them limping and crawling away at speed.

Impressed by her skills, Akari later approaches her and offers her a spot on the team,  because of “that mad glint of hunger for adventure in her eye”. An extremely steadfast person, she is highly amused by his brazen offer, certainly meaning to say no, but finds herself accepting despite herself. Adventure, that’s new. It could be fun.

Once sworn in as one of Rannon‘s servants, she is one of the few who won’t flinch to stare down her chilly new master when so needed, looking after his well-being with exasperated but genuine care.

Bahari is traditionally ruled by empresses and only women may hold the throne.