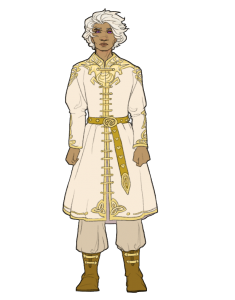 Corrin is the son of King Carryn of Carryn-yehl, and his queen, Neyrika – a mysterious woman the young king encountered during a hunt in the deepest forests. A powerful forest-spirit in human guise, she enthralled the king, wed him and bore him a son, then returned to her wilderness as suddenly as she had appeared.

Prince Corrin grew up at the Carrysh court, beloved by his father, among other humans, with little connection to his mother’s domain. But for all his seemingly mundane guise, he was slowly revealed to have inherited from her many unusual gifts. Extremely empathetic at heart, he would seek to soothe any pain he came across, and soon came to realize he possessed a healer’s touch. The greatest surprise in store, however, was his gift to change shape, taking at times the form of a snow-white unicorn.

When the prince was in his teens, a great darkness fell over Carryn-yehl, as the Ititshi Warlock and his shadow hordes ravaged the land. In the final onslaught, King Carryn fell in battle, and it was just barely that prince Corrin managed to escape the slaughter, racing south in unicorn shape, to seek sanctuary in the desert kingdom of Sirn.

Taken in by the royal family, welcomed as one of their own, Corrin could never forget his beautiful homeland, now a cursed threatening darkness on the northern horizon, and even as he tried his best to ease the suffering of his fellow cast-out survivors, he ached with the pain of its destruction. Often did he ask the King of Sirn for the military support to deliver his fallen country, but wary of the Warlock’s power, the king ever gently but firmly turned him down.

After several years the crown princess Relonia, his sister in all but blood, approached him with a bold plan to strike in secret at the heart of conquered Carryn-yehl, vanquish the evil Warlock and reclaim it again for him and his people. Unable to turn a blind eye to the ruin of his land and people anymore, he agreed. Unknown to the King, the two set out but with the smallest private retinue, to cross the border undetected and attempt with subterfuge what Carrysh military might had failed to accomplish all those years ago.

Making it all the way to the now-dark castle of his childhood, they confronted the Warlock, and in the clash that followed, Relonia tore from the Itishi the amulet that was the source of his power, and as he fell, the shadows that had cloaked the north for so long fell with him. Carryn-yehl was free once more.

Corrin and Relonia returned to Sirn triumphant, to rouse the survivors of Carryn-yehl to return home at last. With them they brought the fallen Warlock in chains, to face judgment for the death and destruction he had wrought. His heart still empathetic as ever, Corrin could not help but reach out to the dark creature, to try and understand why anyone would yearn to cause such devastation, and through a flare of his unicorn powers he learned more than he bargained for. Their souls briefly connected, he ever since shared a chafing connection with the man he should hate more than anyone, yet could not help but also pity.

Corrin finally ascended his throne, but chose to let the land remain named after his father, a connection to its past, before the darkness. Determined and undeterred by the daunting task before him, he set out to rebuild all that was lost, making Carryn-yehl a great and just and welcoming nation once more.

Rannon’s royal colours of arms are crimson and silver/grey.