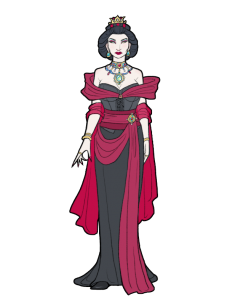 Ebenholtz is an aggressively ambitious lady of Machra-la, magnificent enough to climb high on the social ladder, but not quite extraordinary enough to reach the highest heights. Seeing promise in an up-and-rising young star, she extended an offer of partnership to Narcissus, and with her experience and social network and his beauty and fame, they crushed all rivals and set their sights on the throne itself.

As it turned out, Lapis Lazuli finally beat them on the finish line, and was no doubt tempted to conveniently rid himself of his bitter rivals once crowned – but being rather fond of Narcissus, he chose to let them live.

While Narcissus is perfectly contented with his lazy life in leisure, Ebenholtz becomes increasingly bitter, at their missed opportunity, as well as the ruthless onset of age. Never a particularly sweet person, she grows downright vicious, and a tad too familiar with the bottle.

But when Narcissus is sent in exile as a diplomat to Ku’Ombos after being loosely connected to a plot on Lazuli‘s life, she decides to go with him. Out of practicality, but also unspoken loyal affection, rather to his touched surprise. But after falling fatally ill in the jungles beyond the mountains, and suffering an attack by zealots on the Machralese delegation, she ends up sick, broken and dying.

Through an unexpected act of charity from the Kayalanian diplomat – the former tyrant, Rannon ZanTaoyaka – she is sent on with his personal healer back to Kayalana, where her life can be saved.  Slowly recovering as a guest at the Kayalana court, she finds an unexpected benefactor and friend in the young princess Isokell, who wishes to learn about the big wide world – and has her own reasons to want to know more about what life is like in Ku’Ombos.

The Sinju, the celestial guardian of Isokell, is a mythical beast representing truth and justice.