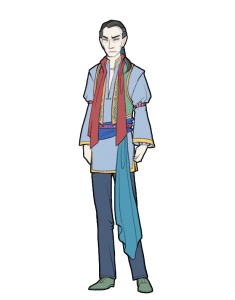 Dagger is a pimp, businessman and jack-of-all-trades in the Floating City of Machra-la.

In his youth a Level Four courtesan of some renown, he saved up a decent enough sum to  buy a name of his own choice, and start up his own business in the Floating City outside the city walls. Jaded and hard, he is a ruthless master to any courtesan in his care, and money is the one thing he truly cares about.

He is in a state of mutual exploitation with his neighbour Kestrel (who insists on calling it “friendship”) who owns the raft next to his, and while both gentlemen are Machralese to the core and may at some point decide a blade in the other’s back offers a better angle at business, for the time being they gain more by cooperation.

Cutting corners wherever possible, Dagger managed to make the bargain of his lifetime, buying a rare Arani slave headed for the Arena through his connections on the black market. Blinded and not very young, the man was still a find, a rare exotic commodity in the slums. Given the name Kitsune, he was rebellious and contrary as many Arani slaves are at first, but was finally broken to serve his master for several lucrative years.

Convincing a wealthy Kayalana nobleman to buy his worn-out courtesan for an astronomical sum of money, Dagger could finally retire for real, looking forward to spending his last years on steady ground in the city proper, turning his back on the Floating City at last.